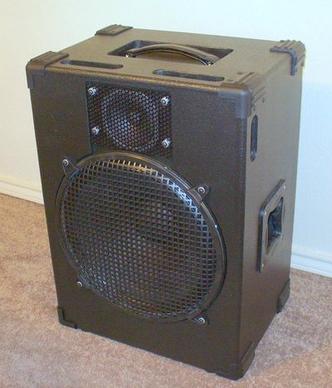 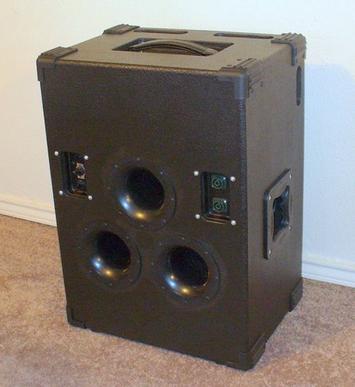 Hathor 1506 (replaces the 1505): Switchable between 4 and 8 ohms; Dimensions 24.5" tall x 18" wide x 14" deep; 38 pounds; 98 dB; 500 watts; -4 dB at 62 Hz with normal tuning; three pluggable ports give three ported and one sealed option (for adapting to different room acoustic situations); top end switchable between 3.5 kHz and 6 kHz (-3 dB points). Another switch toggles between smooth mids and a fair amount of grindy in the upper mids. Woofer is a custom 4 ohm Kappalite variant with more output in the upper mids than the stock Kappalites. Price: $950 + shipping.

The Hathor 1506 combines our growly custom 15" woofer with a high-output (and correspondingly expensive) B&C 6” cone mid whose voicing is especially good for electric bass.  The custom woofer is very efficient (the 98 dB spec is a conservative claim based on the Thiele/Small parameters), and customers have compared it favorably to 410 cabs as far as how loud it will go.

Following in the footsteps of the Hathor 1203, with the mid switch up, the 1506 zigs where guitar cabs typically zag, but a bit more aggressively than does the 1203.  The difference between voicings with mid switch UP and mid switch DOWN is greater on the Hathor 1506 than on any of our other cabs, so it more like getting "two cabs in one".  Like all the other cabs in the Hathor series, the 1506 uses the open-format mid chamber.  The openings allow the midrange driver's backwave energy to escape to the top and sides.  This makes it possible for you to hear your overtones on a very tight stage, gives wide enough dispersion that your bandmates can hear you better, produces a very open sound, and improves cooling relative to a sealed sub-enclosure.

The "4/8 ohm" switch works like this:  The woofer starts out as a "high 4 ohms woofer" and the switch adds just enough series resistance so that the load the amplifier sees becomes, in effect, an "8 ohms nominal" load.  The actual difference in impedance is much less than these numbers imply.  When engaged, the switch reduces the efficiency by about 1 dB and reduces the voltage sensitivity by about 2 dB, but in turn you can safely parallel the cab with another 8 ohm cab for a loud gig.  In 8-ohm mode, the 1506's woofer is about as loud as a stock Kappalite 3015 (non-LF).  The switch can be omitted if desired, reducing the price by $50 and reducing the weight by one pound.

For someone looking to add a second cab to an 8-ohm cab they already have, one of the 15" Hathors makes a lot of sense.  Not only can it toggle between 4 and 8 ohms, but it can also toggle between two different midrange voicings , and two different top end extensions.  The bottom end can be tightened up as needed by plugging ports.  And the wide dispersion of the open-format mid chamber will improve the ability of your bandmates to hear what you're doing.

The photos above are of the 1505; the 1506 looks similar except for the larger midrange cone diameter.

AudioKinesis bass cabs are hand-built to order; we're a small company so we don't have stocks of all these various bass cabs ready to ship.  Please call or e-mail for delivery time estimates.